Logan is stunning. It’s real, and vivid, and hard-hitting in every way. It’s tragic, and beautiful, and captivating. This is Wolverine at his best, and it’s a whole new kind of superhero movie.

Right from the very start, we’re introduced to a completely different side of Wolverine, so different he’s almost unrecognisable. The first scene shows a stumbling, dishevelled Logan emerging from a car being pulled apart by thugs at a gas stop. He asks them to stop and they promptly shoot him and keep at their work. He asks again, they shoot him again, and things get messy. For them. Sounds like typical Wolverine fare, right? Only something is different; He is slower, he seems to take the hits harder, and his wounds aren’t healing. 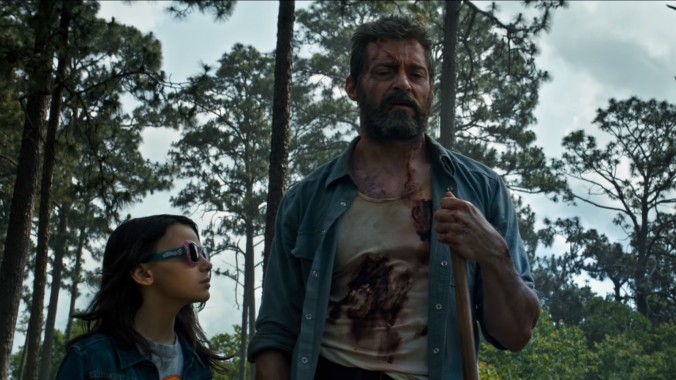 We find out that Logan is sick, and taking care of an even more sick Charles Xavier. They live close to the American/Mexican border, and Logan works as a limo driver to make money to pay for Xavier’s medication (without it, he suffers from seizures which unleash his powers on anyone in the vicinity, causing insane damage on a massive scale), plus indulging in some “medication” of his own. Then a woman finds Logan and pleads with him to take a little girl with him all the way to North Dakota, to a safe place she calls “Eden”. Shortly afterwards, a group of bad guys track him down too, looking for the little girl. After that the story becomes a cat-and-mouse style chase as Logan just tries to get away from everyone and the bad guys try to take the girl. I just massively over-simplified things, but if you want to experience a great story, go see the movie. I’m just ranting about it, not retelling the whole thing.

The performances in this movie are phenomenal, every single part was perfectly cast and each character just feels real. Hugh Jackman has always been amazing as Wolverine, but in Logan he explores new depths to the character. This is Logan as we’ve never seen him but always wanted to.

As a limo driver. That’s what we all wanted, right?

So, now I’m going to list the things I love most about this movie, because I feel like ranting instead of reviewing…

1: Old Man Logan
There’s something captivating about seeing a superhero aged and dying, at the end of his tether, struggling to keep up with the world. And when that superhero is Wolverine, the invincible, unkillable berserker; it’s not only captivating but genuinely moving. Hugh Jackman plays this perfectly; the emotions of an emotionally stunted loner. The body language of an old dying man who’s not used to physical limitations. Jackman has struck the perfect balance in this story, playing subtlety against rage, and love against loss with the deft hands of a master craftsman. His 17 years of playing Wolverine have culminated in one of the deepest and most beautiful portrayals of a comic book character ever seen on-screen.

2: Charles “I’m fucking 90” Xavier
The same can be said of Patrick Stewart’s Charles Xavier. He is going senile, and the exploration of a brain powerful enough to destroy the world also going through the final stages of life is heart-wrenching. He plays an old man whose mind is failing him after decades of almost unlimited power, and he plays it in such a real, vivid way that his vulnerability and frailty is one of the most powerful aspects of the film. Xavier in this movie is written and performed as a real man, struggling with a real illness, who just happens to have superpowers. It’s a fine line, but one that Logan (and Patrick Stewart) tread with perfect balance. I’ve always found dementia and senility to be particularly powerful and terrifying in storytelling, and in Logan its exploration is even more poignant, as the effects of losing his mind include Xavier causing catastrophic damage to countless innocent lives. The dichotomy of incredible power contained within a helpless mind is jarring and deeply moving. 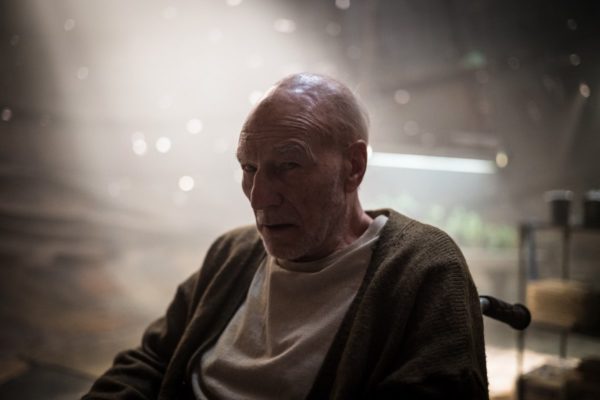 “I could kill you with my mind… But who are you, again?”

3: X-23 aka Laura
Relative new-comer Dafne Keen is phenomenal as X-23, and absolutely stole the show, despite the fact that she was completely silent for at least half of the movie. One thing I love about her performance is she has a great dichotomy of bravery and fear; when she needs to fight she does not hesitate, but once it’s over she’s terrified of being hurt, and whenever she’s in a position of helplessness she is completely beside herself with terror. To me it shows that even at 11 years of age, Keen has obviously got the skill, thoughtfulness and attention to detail of a great actor. She played X-23 as an animal with the intelligence of a human, just as a lab-grown person conditioned to be a human weapon would behave. My favourite aspect of her character was how whenever she was shot or hit or anything, instead of cowering or even flinching, she just let out a scream and pushed her attack even harder. It shows her fight-or-flight response has been so heavily altered that there is absolutely no “flight” instinct. I love this, and it’s exactly how Wolverine would have been if he’d been a child when he was experimented on. I also love the dynamic between Laura and Logan, a father-daughter relationship where both are broken and struggling in their own way. 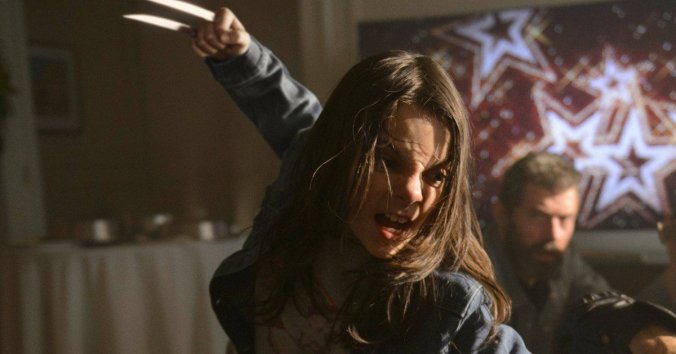 4: The Violence, my goodness the violence!
I love that Logan got a higher rating than previous X-Men movies; finally we get to see Wolverine go berserker properly! THIS is what Wolverine looks like when he fights. Not to mention X-23, holy damn! I absolutely love the first scene where we get to see what Laura can do: She’s sitting in an abandoned warehouse, eating cereal and looking as innocent as only an 11-year-old can. The bad guys are outside, having restrained Logan after a bit of a fight. The bad guy sends a few of his men into the warehouse to capture the young girl. We see Laura calmly watch the security monitors sitting next to the bench where she’s seated. She knows exactly what’s coming for her, and does not look frightened. Cut back to outside, and the bad guys and Logan suddenly hear screaming and gun shots, and then quiet. Laura emerges, alone, carrying something in her tiny arms. She gets close enough to the group of bad guys, shifts her balance, and throws the thing at the leader. It bounces and then rolls to a stop at the bad guy’s feet, and we see it’s the head of the biggest guy who went in after her. They open fire and she runs back into the warehouse, chased by more enemies. What proceeds is like something out of an Alien movie, but where the Alien is a tiny 11 year old girl. She hides, occasionally being briefly sighted by an enemy out of the corner of their eyes as she bolts between benches and walls and pillars, brutally tearing apart anyone she comes into contact with. This movie is bloodthirsty, and intense with the action scenes. It’s amazing, and I loved every second of the action. 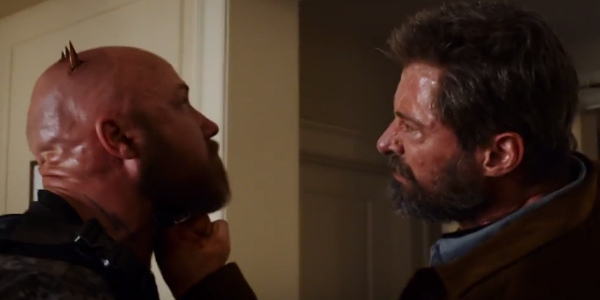 This is probably the tamest moment in the whole movie.

5: The End
Okay so spoilers, obviously… But holy crap. I absolutely love the ending to this movie, because it’s literally the only time I’ve ever seen a main character who has the ability to heal from anything die and stay dead. As much as I love Wolverine, it’s so satisfying for a character to actually remain dead instead of being subject to ridiculous Hollywood Deus Ex Machina style resurrection regardless of how much it detracts from the tension and emotional turmoil that should be caused by the death of a character. There were two moments that really hit me;
-Laura and Logan’s moment of acknowledgement just before he dies… she actually says “daddy” as she sobs, and it’s absolutely heartbreaking.
-The moment, just before walking away, when Laura takes the makeshift cross out of the ground and re-positions it in a much more appropriate and meaningful “X” at the head of Logan’s grave. 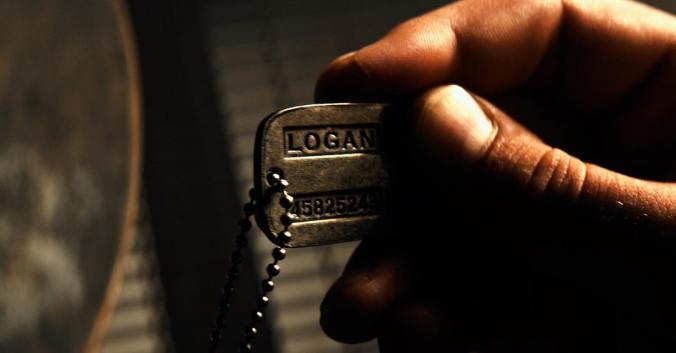 I just can’t express how amazing this movie is, especially after the previous Wolverine films. This is exactly what fans have been waiting for, and more. It’s more than a superhero movie, it’s more than an action movie, and it’s more than a great movie. It’s one of the only (if not THE only) comic book movies that is entirely focused on character development instead of being event- and action-driven. These characters are just real and present in a way they’ve never been before, and it makes for a truly special and satisfying cinema experience.