Holy crap, No Man’s Sky you guys. Seriously, this game is going to be insanely, scarily good.

Here’s the elevator pitch (or my version of it anyway):

You have a spaceship which can travel anywhere in the universe as long as you have the fuel to take you there. You have an entire universe of unique and diverse planets to explore. A literal ENTIRE UNIVERSE. So many unique planets that if you had 10 lifetimes to devote solely to this video game, you still would not see them all. Someone has created a real video game the size of the universe, and you can explore the entire freaking thing!

I’m just going to start by quoting a bit of the Wikipedia article for the game:

“No Man’s Sky’s gameplay is built on four pillars — exploration, survival, combat and trading — in which players are free to perform within the entirety of a procedurally generated deterministic open universe, which includes over 18 quintillion (1.8×1019) planets, many with their own set of flora and fauna. By exploring, players gain information about the planets that they can submit to The Atlas, a universal database that can be shared with other players of the game.”

Did you see that number? over 18 quintillion! I didn’t even know that was a number until I looked up this game! That’s insane! It’s literally beyond human comprehension. This company (Hello Games) has literally CREATED A UNIVERSE. This is not just a video game, this is a technological and creative marvel. This is a benchmark, a life- and world-changing innovation. What’s even more impressive is that due to the way the code creates the planets, when you play offline, you get exactly the same planets as when you play online. The planets are procedurally generated, which means a single “seed number” is used to create everything using deterministic algorithms and random number generators via mathematical computation. That basically means that one number is all that is needed, and the rest is created as a flow on: the seed number creates the foundation, the code created from the original seed is used as the seed for the next part, for example the position of the planets in the first Solar System, and then the code generated from that determines what life forms will be generated on the planets in that Solar System, and so on. So, by setting up a self-generating universe, they’ve effectively eliminated the need to create these planets and life forms by hand, meaning that all they needed to do was create the rules and laws by which the life forms and planets operate (not saying at all that they didn’t work hard, just that they worked smart and freaking nailed it). Also by using specific coordinates to travel to any given planet, they’ve created an awesome and efficient way to quickly code an area for generation by the player. The coordinates work as the seed for the Solar System when used to travel. This means that even offline, if a friend discovers a useful planet and gives you the coordinates, you will be able to travel (provided you have the resources to do so) directly to the exact location your friend discovered and see the exact same thing.

“Get over here dude, there’s a Brachiosaurus. Seriously, dinosaurs!”

Now, as a musician, what I find most intriguing and impressive is that even the music is procedurally generated. These people created MUSIC THAT WRITES ITSELF based on where you are, how much danger you may be in, what the look and feel of the planet is like, and so on. That’s ridiculous! That’s so freaking cool that I don’t even know how to describe it! Maybe I should get these guys to procedurally generate me some compliments to give them; They can do it for everything else. Along the same lines as the music, is the fact that they’ve also created a way to procedurally generate the animal calls, ensuring that not only will the life forms on each planet look different, but they will sound unique too. I can’t even begin to describe how impressive this game is and I haven’t even played it yet. 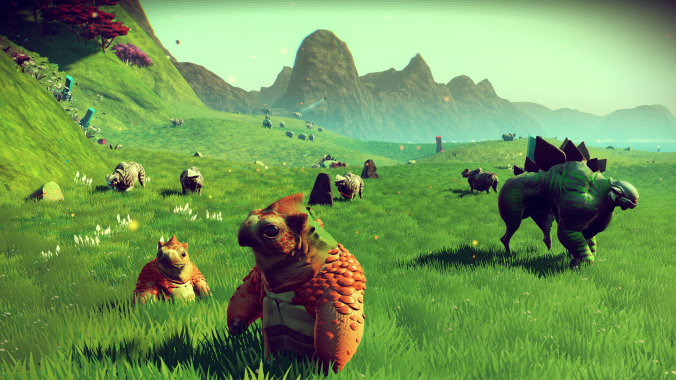 I really hope these ones sound exactly like Jawas.

So as I said before, the whole game revolves around exploration, survival, combat and trading. Those first three are my favourite things to do in video games, and the added element of trading ensures a more realistic approach to being a universe-travelling explorer, and also encourages online cooperation and communication between gamers, something I think is incredibly important in this era of ultra-competitive online death matches full of needlessly aggressive tweens screaming pointless insults and empty threats at each other. In No Man’s Sky, people can fight, sure, but it’s all about exploring and reaping the benefits of said exploration through trading and upgrading your equipment using the resources you get. It’s approaching it from a more pragmatic, real-world perspective; if we all actually did have the ability to explore the universe that deeply, we would only benefit as a species if we worked together and shared the resources and knowledge we obtained from the universe. It also offers a unique reward for exploration and a more healthy, less destructive type of competition: When a new planet is discovered in the online game, it can be uploaded to the Atlas, and the player who discovers it first will be credited by name and will be able to name their discovered planet as well as leave notes for other players or themselves for reminders (such as whether the atmosphere is toxic, what resources there may be, and how dangerous/numerous the local life-forms are).

One thing I’m really hoping for and that wasn’t explicitly mentioned in any articles or promotional material I could find is properly customizable spaceships. I know you can upgrade them as that’s an integral part of the game, but what I mean is being able to actually design the look and feel of the ship you own. It would suck if it was the same generic ship for everyone, or if certain upgrades had specific aesthetic looks and you couldn’t change it much at all (I’m lookin’ at you, Destiny armour). I want a really unique, special vehicle that no one else has. I mean, it’s obviously not that big a deal, but it would make a difference to me and I’d imagine to a bunch of other people too. Having said that, the ship that’s shown in all the promotional material basically looks like a legally safe (if a little generic) version of an X-Wing, and who doesn’t wanna fly around the universe in their very own X-Wing? I know I do! I just feel like it’ll be a bit weird if everyone’s flying around in the exact same vehicle.

“Check out my X-Wi- I mean, my non-Lucasfilm owned, completely unique spaceship…”

I’m also really interested in how the flight controls work and what the control panels and consoles look like in the cockpit. I know there has been some gameplay footage (and I’ve actually seen it, but my memory is God-awful), but I think it’ll feel different when actually playing the game and I hope it works well. Don’t get me wrong, I have absolute faith in the Hello Games crew and I’m all but certain they’ll pull it off, I just have to wonder about it until the game is in my hands.

My absolute favourite thing about this game though, is that it can be played offline with almost no change in gameplay, quality, exploration options, or anything else. I’ve already mentioned the fact that you can play offline, but I just really wanna stress how much I love that option and how impressive it is that even when you’re offline, you’re still exploring the same universe. I’m not a huge fan of people, especially online people (since as soon as any kind of anonymity is granted, people suddenly turn into revolting, hate-spewing trolls), and so I love having offline options in video games. My favourite games are invariably offline, single player, open-world RPG type games, and this game ticks all those boxes, but instead of open-world, it’s open-freaking-universe. I like it that the online/offline choice changes almost nothing about how the game is experienced, beyond only being able to save planetary discoveries while online (which is obviously fair enough).

I haven’t been this excited for a video game in quite a while, the last notable ones I think being Fallout 4, Battlefront, and Arkham Knight. This one is on its own unique level though, achieving things that I genuinely did not think would be possible in video games for another few decades. We’re making a huge step forward here, and I think this kind of technological breakthrough has potential applications in Virtual Reality which could really help with creating more complete worlds to explore using much less processing power. But I’m getting ahead of myself. This game on its own is gonna be plenty impressive enough. I’m just super excited about the prospect of seamlessly flying from one planet to the next, getting out of the ship, and walking around. The more I read about this game, the more impressive it is, and the more excited I am to play it.

Even conversing with NPC aliens in the game (who can appear anywhere in space between planets or on a planet’s surface) is super awesome, as they will have unique alien languages which will require either translation using monolith-like “Rosetta Stones” found on some planets or wild guesswork followed by process of elimination (obviously this one requires an insane amount of luck to not end up blown into atoms in space by disgruntled aliens insulted by your accidental use of the alien equivalent of a “ya mum” joke). But once you’ve established a working relationship, you can trade with and support each other and there may be other perks later on too depending on what the developers have in mind. The very fact that there are random unknown alien species scattered around the universe each with their own complete language and resourcesready to be contacted shows an awesome level of attention to detail and creativity from the developers. They’re really putting everything they have into this game and I think it’s definitely going to show.

Even the concept art looks perfect.

One more thing I’m hoping this game will nail is the control and design of the ships, as I mentioned before. I’m hoping for something along the lines of Elite: Dangerous, as the controls and interface of the ship were realistically complex and intriguingly immersive. It would be amazing to see something like that. I’m just hoping it’s not TOO simple. I understand that they’ve built an insanely massive game, and that is incredibly impressive, but it would be sort of wasted a little if the ship you use to travel through that incredibly massive universe was controlled by boring, two-dimensional, barely simulator-level flight controls. I’m not at all suggesting that’s what’s happened here, I’m just saying I hope it’s not the case.

“OK, now… Where did I put that instruction manual?”

Anyway, those are pretty much all my thoughts on No Man’s Sky, and I’m just gonna end on another over-excited burst of praise:

Seriously, guys, this game is gonna be SO INSANELY FREAKING AWESOME. JUST SO DAMN GOOD, GUYS.